My current setup is as follow
Ixora carrier board v1.2
Apalis iMX8QM v1.1

I am trying to build a python app. The app writes a file to disk. I have noticed strange behavior in debug and release modes of the application.

When I run the app in debug mode, the app folder which i call “file-write” is owned by torizon when I log into the docker container. This means it has correct permissions for python program to write a file to disk.
Here is a sample output.

When I run the same file in release mode, file-write folder has root permissions and the app gets a permission denied error when it tries to write to disk.

Why is there difference in behavior?

I have also noticed strange behavior in Dockerfile.release . 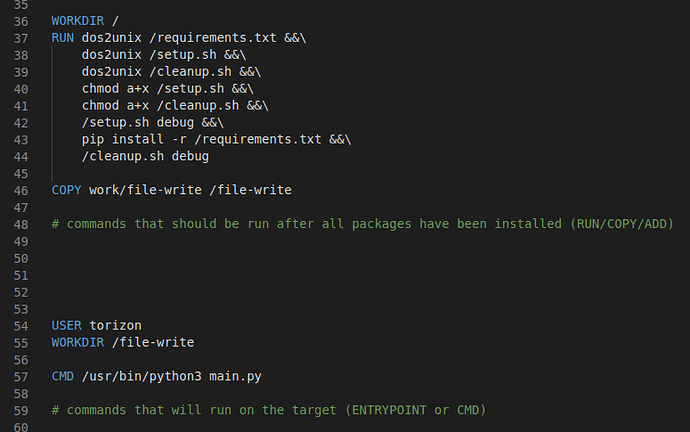 How can I give ownership of file-write to torizon in release mode.

I’ll ask the Dockerfile release and the folder ownership questions to the IDE extension team and I’ll reply to you as soon as I have an answer on their side.

You can change the ownership of the project folder by going in the extension configurations and adding this value to property targetfiles:

After this, rebuild the container by pressing:

Then deploy it to the module:

Hope this helps you.

It should be targetfiles. One thing I forgot to mention is that this property should only be applied to release, as it breaks the debug build. You can check how to apply a property only to a specific type of build here: Systemd service management on Torizon - #17 by lucas_a.tx. However, I have a possible better solution than using this property, see below.

I’ve talked to the extension team and here’s what I got:

With this difference in mind I’d recommend creating a new bind mount in volumes and write all your files there instead of using the app folder, as this alternative should work without problems on both debug and release builds. If you do this the owner of the bind mount will be torizon if the extension is accessing the SoM with this user, which is usually the case.

Let me know if this helps you.