I have connected an iPad to Dahlia board’s USB-C DRP port. I want to charge iPad from this port but that is not happening. According to another forum, following commands should be enough to change the power roles. But Toradex Linux seems doesn’t have such a folder to switch the roles.

Any idea, how we can charge the iPad and keep RNDIS peripheral device active on the SoM side?

We have some comments about this, although we didn’t check with the experts yet.

On Dahlia, the USB that is dual role capable (X3A, if I am not wrong), is actually only USB 2.0 capable. And from the remark on the schematics, we can see that for this case, we have only 0.5A. On 5V, this will be 2.5W. Is this enough to charge an iPad? 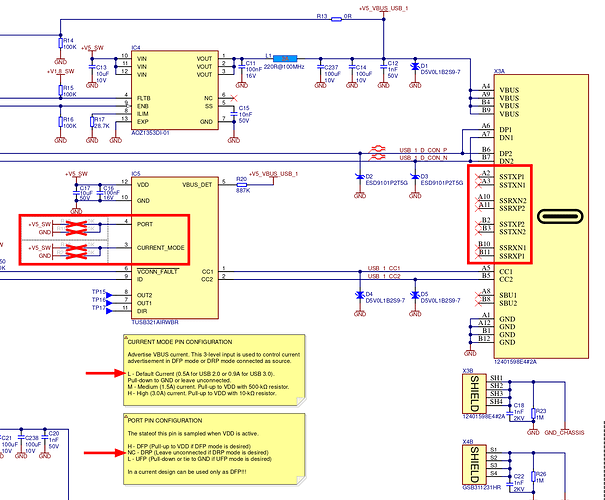 Also, from the Linux kernel documentation, to enable the typec on sysfs (/sys/class/typec/port0/power_role) , seems like the usb-c-connector is needed:

About this, more research is needed.

When I plug it to an USB2.0 port on an old PC, it starts charging.

Regulator on the Dahlia board AOZ1353 supports up to 3.5A. But since PORT pin is floating, it advertised as 500mA capable only. But rather than the charging capacity, my actual problem is that I don’t see any attempt to charge external hosts like iPad or iPhone.

According to my study USB-C supports that SoM can be a peripheral (RNDIS gadget) and iPad/iPhone can have a host role and still sinks power from the SoM side. And as I see Dahlia schematics support that but not linux.

I believe that there must be a way to configure it on linux so that the electronics starts charging iPad/iPhone which is host.

Any update on the topic?

Sorry for the delay.

Please check this webinar about USB-C from one of Toradex’s Hardware Experts: Peter Lischer 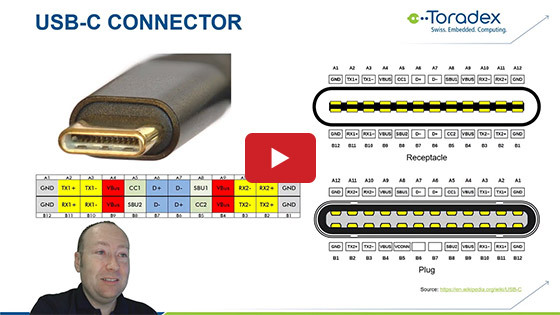 Add USB-C to your next carrier board design! | Toradex Webinar

USB-C is not just a smaller connector that you finally do not have to plug in three times because you tried it upside down. In this webinar, Toradex HW expert provides you tips and tricks and have your technical questions answered.

I have attended to the webinar. That question was mine. But unfortunately the answer was not targeting my question. iPad for sure accepts any standard USB voltages including 5V and 900mA for charging and yet this is still not the case for Dahlia board. The reason is not clear.

For a quick test, I connected a Samsung S20 FE (Android 12) to the Verdin Development Board V1.1A & Verdin iMX8M Mini V1.1A running Reference Minimal Image from BSP 5.7.0 using a USB-C/USB-C cable and the phone is charging.

I just made another test using Samsung Galaxy A12 Phone which has embedded USB-C port.

When I plug the phone to Dahlia board’s USB DRP socket directly with an USB-C to USB-C cable, on the top left of the phone’s screen I see that an USB logo appears which means the phone recognizes the Dahlia Board but the phone is not being charged.

Isn’t Development board same as Dahlia board in terms of USB connectivity? Next week I can test it on development board as well. We have that too but currently another colleague using it.

Please also note that: As I remember minimal image does’t have USB Gadget RNDIS enabled. You should use Toradex Reference Multimedia Image v5.7 for testing.

I’m new to USB C and watched that useful webinar.

As I understand it, simple CC pins role configuration with IC like TUSB321 allows a) DFP (host with power source), b) UFP (device with power sink), or c) DRP (like OTG, switching between DFP and UFP, simultaneously host<>device and source<>sink). Power role switch without device<>host role switch has stronger requirements. Special comms protocol over CCx/VBUS lets cable ends negotiating role switch so that nothing blows on any cable end. PTN5100 mentioned on webinar Notebook Example slide is one of such advanced IC’s. TPS6598x list of role swap requirements on page 7 may give you a clue what do those IC’s
TPS6598x Power and Data Role Swaps (Rev. A) (ti.com)

Not sure about phones with USB C, but I guess by default it should just connect to power supply as UFP. Sharing pictures or files is UFP, internet tethering is UFP as well. As I understand @Fide was asking about iPhone initially in DFP mode and power role switching to iPhone = power sink, and Verdin = power source. So switching your Android phone to host somehow should make Verdin board stop charging it.

We support IP connection from iPhone to USB A on our board. Iphone (at least version we tested) for some very smart reason allows sharing only mobile internet, but not Wi-Fi. Anyway, while mobile network sharing is established (and of course iPhone keeps charging from our host), app on iPhone is able to TCP/IP communicate with our USB host (usbmuxd, ipheth, service for pairing with iPhone and voila, we are connected). So, if indeed you operate with iPhone in host mode, there still should be a way to connect it as device.

Taking a look at the Reference Minimal Image from BSP 5.7.0, there are USB RNDIS related files:

I am following up with some tests on your hunch Minimal vs Multimedia Reference Image regarding phone charging over USB-C.

As I am using only Verdin Development Board (V1.1A), I am talking about connector X34, marked as USB DRP on the carrier board.

And the smartphone is the same as above: Samsung S20 FE with Android 12.

These are the results for the question “Does the phone charge?”:

What I understand from this is that Verdin Development carrier board is capable (at least at some level) of power delivery using the port X34.

Right now I also don’t if USB-C power delivery capability is meant to be a feature or not.

I will bring these results to be internally discussed and I will update this thread as soon as I get feedback.

Thanks for bringing this up, @Fide. And thank you @Edward for your contribution, which is always greatly appreciated

In complement to what @henrique.tx has said, we did some additional tests with the Verdin iMX8MP V1.1A and it’s indeed able to charge a cellphone. We tested it with a similar setup and an Iphone.

If you have a look at the module’s errata: https://docs.toradex.com/109492-verdin-imx8m-plus-errata.pdf you can see that on the V1.0 of the modules there was a problem with the USB and this explains why we weren’t able to do power delivery with this module and version.

Does this help you?

I was informed that you received some Verdin iMX8MP V1.1A. Is that right?

Were you able to test its phone charging capabilities?

Yes we have received the modules with v1.1A. I had a chance to do couple of tests.

I observed that new modules attempts to charge iPad when I first plug it. But after a few second iPad reports back that “it is not charging”

I conducted the same test on a Samsung Phone which has build in USB-C port. There it seems working fine.

Then I installed R18 10Kohm on IC5 to make Dahlia board 5V and 3A capable. After this modification both Samsung and iPad stopped charging and the module started behaving exactly like v1.0D.

I conducted the same test on a Samsung Phone which has build in USB-C port. There it seems working fine.

From this, we can conclude that both hardware and software supports charging devices, right?

I observed that new modules attempts to charge iPad when I first plug it. But after a few second iPad reports back that “it is not charging”

Your requirement is specifically to charge Apple devices? Does it work iPhone?

If iPad and iPhone don’t charge, maybe there is a need for some software support for charging Apple devices…

If iPad doesn’t charge, but iPhone does, might still be a lack of software support (who knows what Apple does under the hood

) or maybe iPad is too hungry?

iPad must be much more power hangrier than iPhone. Googling for a minute gives a lot of results, overall impression that older iPads do charge even from PC and all cheap power banks and newer ones deny most of sources and may require wall adapter with >5V power delivery.

Hi,
I have only just started to work with Toradex in general and therefore have no experience in the software area,
but since our product is also going in a similar direction to @Fide, I tried some things with USB-C, maybe I can help someone

I have the following hardware:

I was able to use a USB-Tester to measure the output current of diffrent devices.
The maximun output current of the Development Board is 0.9A.
Equipping with 500K or 10K does not change that.
(Are software changes necessary to get the specified current of 1.5A or 3A?)

Especially with regard to the Ipad, the limit of “charging” seems to be around 1A.
The iPhone, for example, charges at 0.9A.

Tested with some other power sources:

P.S.: The Ipad shows “Not charging” but is still supplied with the 0.9A, which is enough to slowly charge it (in standby).

@d.baum and @Edward for pitching in and sharing valuable information.

@Fide, I have more information from R&D about Dahlia’s hardware:

Having said that, some tests that you can perform:

Does this help you?

There is also a document from Apple about potential issues with devices that won’t charge: If your iPhone or iPod touch won't charge - Apple Support. It might be helpful.

And did you test charging an iPhone? Did it work?
Which cable are you using to connect Dahlia’s USB to the Apple device?

Do you have any news on this topic?