I have question abut the WDOG3 clock source.
Is it one independent clock source and WDOG3 continues the operation in case external XTAL stops operation.

Just for clarification, are you referring to hardware watchdog or real-time clock (software watchdog)?

There is watchdog functionality that is set up via software. In some cases, there might be software errors that render the watchdog unfunctional and your module might hang.

Depending on your security requirements, it could be beneficial to use a hardware watchdog, it is advised to use an external watchdog.

I use the Watchdog, Watchdog Control Register (WDOG3_WCR) located at 302A_0000 from M7 core.
The SRC->M7RCR set to perform the system reset if WDOG3 expires.
At same time RDC used to protect the WDOG3 and SRC from modifications other SW except M7.

Hello @Vladimir,
Looking at the IMX8MPRM, I found this table: 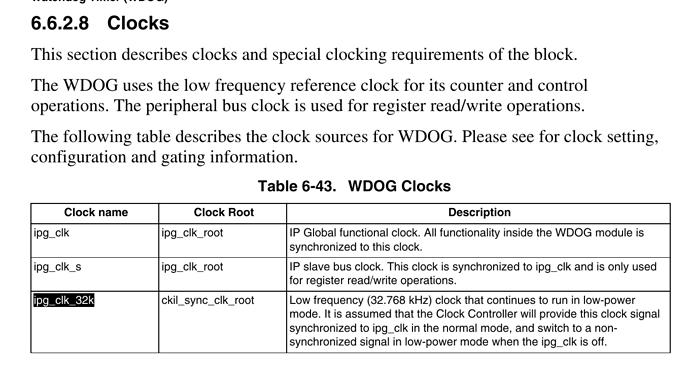 The clock that is used as the source for the counter is the ipg_clk_32k, which has the special functionality of being able to switch to an internal clock source in case the external clock is not available (due to low power mode for instance).

I don’t know exactly how this compares to the STM clock source, but it seems that it will keep running in most situations.

Thanks for your answer.